We will be holding our next round of networking evenings in November and December.

These are ‘buy your own drinks’, invitation only events but we will make sure you are well fed.  The events are always a great opportunity to meet your local Board members, old and new friends and associates.

We will shortly be launching a job vacancy page on our website, which will be accessible and free to the public to view.

Placing ads will be free to Members and Corporate partners and you will be able to post details of vacancies yourself.  To begin with, though, we’d like you to send details of any vacancies you have to us and we’ll post them so that we can get used to the system and put together some guidelines to help you do it quickly and easily.  Once everything is running smoothly, you’ll be able to post information yourselves, as and when you want, to advertise a vacancy.

Send us your vacancy

Hydrogen seems all the rage at the moment. A recent release from the Rocky Mountain Institute reports green hydrogen is set to take a major role in emissions reductions by 2030. It states 34 countries have developed national hydrogen strategies since 2019 and EU member countries have quadrupled their hydrogen targets to 10 million tonnes by 2030 in just the last six months. Electrolyser production capacity is expected to keep pace, with BNEF predicting capacity to produce electrolysers will be sufficient to meet demand at least until 2027.

Widespread use of hydrogen as a fuel is not a new idea. Visionaries such as Jules Verne were on board 150 years ago, saying: “I believe that water will one day be used as a fuel, that hydrogen and oxygen, which constitute it, used alone or simultaneously, will provide an inexhaustible source of heat and light of an intensity that coal cannot have.” (The Mysterious Island, 1874). Perhaps in partial homage to this and another of his famous works, you can now access a free, downloadable book that takes a trip around the world describing visions of what the hydrogen economies of over 25 countries could look like over the next two decades. Unfortunately, New Zealand didn’t make the list but all the usual suspects and major economies are included.

Continued improvement in electrolyser efficiency will be crucial to bringing down the cost of hydrogen production. Scientists from the National University of Singapore have shed new light (pun intended) on electrolysis efficiency by discovering – during a power-cut – that darkness inhibited efficiency. They are now investigating the light-dependent properties of the catalyst to find ways of exploiting the superior efficiency.

Update on carbon capture technology and the CCUS industry

McKinsey reported this week on the state of carbon capture technologies and the CCUS industry. It concluded uptake of CCUS needs to increase 120 times by 2050 if countries are to achieve net zero targets. 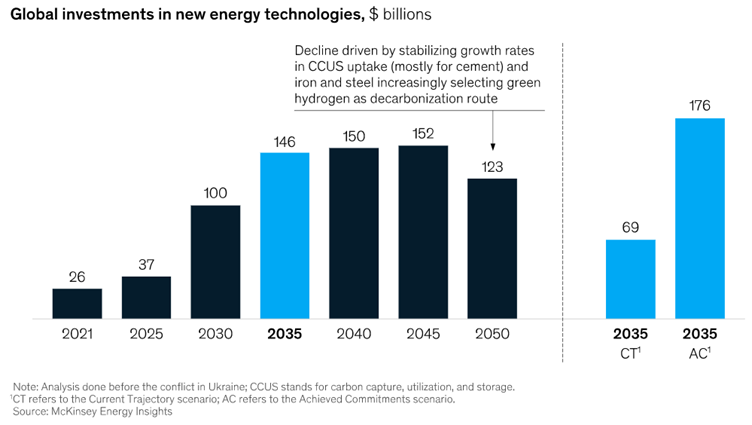 Meanwhile, Purdue University scientists are experimenting with carbon capture off the back of wind turbines, buildings model simulations to see if channelled airflow can make direct air carbon capture more viable. Maybe they should be looking at combining the carbon capture technology with the downdraught style turbines we featured a couple of weeks ago.

Despite numerous studies and stories indicating wind energy is now one of the most economic forms of generation and renewable build is generally increasing, it seems the wind industry in Europe has experienced a bit of a blip recently. Orders for new turbines are down 36% in Q3 2022 relative to Q3 2021. The drop is being attributed to rising costs (driven by inflation), slow permitting and uncertainty over electricity market interventions in the current crisis in Europe. The increasing government focus for industry to accelerate decarbonisation pathways has motivated organisations to consider their carbon footprint and how it impacts enterprise value. The Decarbonising New Zealand Conference will be held in Wellington on 5-6 December and the event has been designed to provide guidance at both an executive and practitioner level to empower this consideration and enhance the delivery of operational decarbonisation. The insights offered on operationalising decarbonisation.

The insights offered on operationalising decarbonisation will cover many industry fields including bioenergy, process heat, energy, transport, and the built environment. 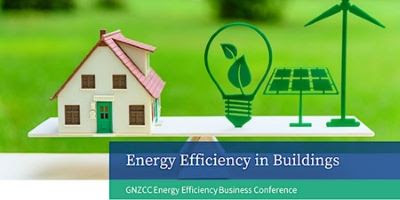 GNZCC’s online Energy Efficiency in Buildings conference is a platform for German companies to showcase their latest technologies and products to the New Zealand market. You can hear from six German-based companies and learn about their products and service.